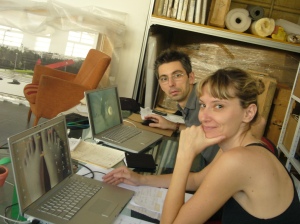 Eva and Franco Mattes are a duo of New York Based artists who were both born in Italy in 1976 .  They are best known for their subversion of public media and are among the second wave of internet artists.  They subvert mass media to expand into and affect physical space.  Within their art they challenge dominant power structures of our society and explore the impact of technology in our society.  Their pieces are often controversial and could be considered illegal since they have used plagiarism and hacktivism to complete some of their pieces.   They even call themselves European con artists.

Some of their work is completely unbelievable and it is crazy that they were able to pull it off.  For example, the artists convinced the populace of Vienna that Nike had purchased the Karlsplatz and was going to rename it “Nikeplatz”.  They set up a fake Nike advertisement campaign by creating a website and installed the Nike logo on a public square in the Vienna.  This news went nation wide, provoking everyone; citizens, city officials and the real people in charge of Nike.  Nike took legal action against the artists but they ended up winning in the end.

Pieces like this just go to show how gullible people can be but also how immersed we are into popular culture.

This duo of artists loves to prank their viewers  but I think it is cruel.  In one of their works, No Fun, was a simulation of a suicide on a chat room that included real time responses of the participants. 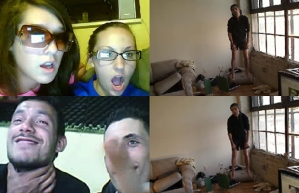 As much as I think it is interesting to see peoples different reactions, some laughed or made fun, some were angered, some confused or sad; it was a cruel prank.  It also showcases how disgusting some people are when they are placed in this situation.  I was honestly disgusted by some peoples reactions.  This piece showcases how some people are so desensitized to death and how disrespectful and horrible they can be.  “It’s the internet so of course it can’t be real” is probably what people think, but it could be.  What if they were faced with this simulated death in real life? Would they respond the same?

I love that their work is so vast, going from recreating the irony of a meme 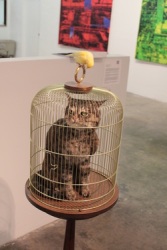 to creating a piece of software that once it is launched, shuts down your computer.

One of my favorite pictures is from art exhibition It’s always Six O’Clock.  This is the recreation of Gulliver’s travels but with Winnie the Pooh and popular pop culture characters.  I think this is a metaphor for society but I also think it represents that our generation wouldn’t even know about the classic stories and that to understand them we have to replace them with popular characters we personally enjoy.

Works like this, along with many other pieces create open ended narratives that mirror society.  They explore our identity as a culture and challenge it.