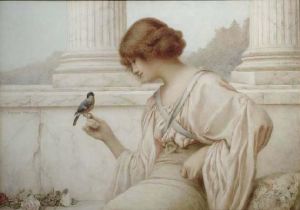 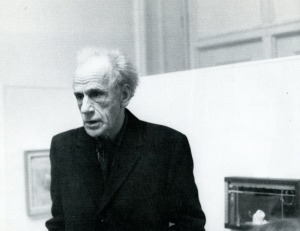 Joseph Cornell lived from December 24th 1903 to December 29th 1972 in New York.  He was an American artist and sculptor.  He was influenced by Surrealists and he was also an Avant-guard experimental film maker.  He had no professional training in art which is surprising because he is one of the pioneers and most celebrated exponents of assemblage.

Joseph Cornell’s most distinctive works are his ‘boxes’.  These boxes are usually glass fronted and arranged with different collections of photographs and random objects to create a scene.  Cornell loved to go to second hand book shops and secondhand stores looking for old nostalgic trinkets. 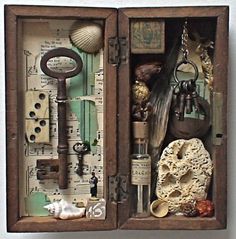 What is most interesting is that a lot of his boxes were meant to be handled and the pieces inside of the box to be moved.  Unfortunately now his works are displayed behind glass in museums meaning we can’t experience some of his boxes the way he intended.

The items Cornell uses are nostalgic in a sense that they are fragments of once beautiful objects and things that could have been precious to people previously.  He pairs objects with other objects not related but arranges them in a fashion that is beautiful and meaningful.  If you pick out one of the things in his boxes and try to look at it on it’s own it wouldn’t be considered extraordinary but all together with the other pieces it makes something worth seeing.  Once the objects are connected the box is able to tell a story.

Art can have multiple meanings and of course each piece probably meant something personal to Cornell but since we do not know what that meaning is we take away our own.  Joseph Cornell’s shadow boxes invite the viewer into his life and how he sees the world and what interests him.

On our class discussion board one of my classmates pointed out that Cornell had a fascination with birds and that the birds could represent the idea of freedom and wanting to travel beyond New York.  Cornell rarely traveled beyond New York which is surprising to me because a lot of his boxes look like he traveled many places, collecting trinkets for the purpose of creating his art.  Maybe through these boxes he was able to experience the world on his terms, creating the places in his mind.

The piece that stood out to me the most is his box titled “The Pink Palace”.  It is said that this box alludes to the fairy tale of Sleeping Beauty.  Cornell was fond of ballets such as Swan Lake, The Nutcracker and in this case Sleeping Beauty.  Both the ballet and the fairy tale of Sleep Beauty have themes of romantic love and historic pageantry which I see clearly in the miniature world Cornell has created within this box.