Vanessa Blaylock is an avatar virtual public artist.  Her work invites avatar communities to express their identity and culture as well as demand their own civil rights.  Not much is out there about her personally other than what she chooses to share with the virtual world.  She is very active on social media, posting on places such as Facebook, tumblr, twitter, her own site, and iRez Virtual Salon (http://irez.me/about/) which she is the editor for.  She also enjoys walking, which is stated on multiple of her social media accounts (also her fitbit log ins).

Avatars are “pseudonymous identities”.  Most people would say that using an avatar is hiding.  Blaylock disagrees.  She feels that avatars are not like “annoymous identities” at all.  Blaylock, along with other avatars consider themselves intelligent identities whose identities are their own.  They don’t associate with their legal “taxpayer identity”.  They consider themselves emancipated from that  and define their beings by their presence in virtual space.

Although to me her art is unconventional I do understand what she is trying to do.  There is a whole community out there that can be empowered and inspired by her and her work. 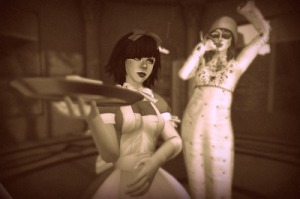 On her website under the category “Virtual Public Art” she has activities for other avatars to participate in.  The Vanessa Blaylock company projects “emphasizes the freedom and voice of the individual. Express your ideas and explore your identity by participating in these Activities.”

In the hangout that morphed into an open house, 21 of us spent some time at Kimika Ying’s Sister Planet. We met in a clearing and used umbrellas to shield us from the acid rain. Later we conversed in the crew lounge and later still ventured into the bog, the hills, and the other unique features of Ying’s Steampunk meets the mid-20th-century counterfactual Planet Venus.”

She has many activities like this that can bring the avatars together forming a sense of community.  By displaying this on her blog, or others posting pictures the images spread like propaganda in a way.  There are so many people who don’t understand avatars or Blaylock’s type of art and this is a way that makes it known.